Asifa Impression #3: The Reason for the Ridicule

After writing about the universal appeal of the Internet Asifa and the widespread negative reaction of much of the media – including downplaying the content and/or using the event to launch into Orthodox Jew-bashing – the question is: Why the attempt to blunt the message?

I’ll answer that from a story I heard from my good friend, Rabbi Label Lam.

A man went tubing up the Delaware River with a group. What a relaxing experience it was! Feet dangling over the sides of the inflated rubber tube, rhythmic sounds of the river, an occasional splash of cool water as he gently paddled…. It was so relaxing. In fact, at one point he decided to just close his eyes for a few moments and take in the wonderful rays of the sun.

This is the life, he thought to himself. No worries. No cares. Just relaxing.

That is life, Rabbi Lam explains. Growth – psychological, physical and especially spiritual – requires work. Going against a current. Exerting oneself. Sometimes more, sometimes less – but exerting oneself. Some people think they are living the life. They don’t need to work too hard. Take in the rays and relax like me, they tell people.

END_OF_DOCUMENT_TOKEN_TO_BE_REPLACED

In HaModia’s Pesach edition there was a special supplement called “Kids of Hope.” I had two articles in there. One was entitled, “Girls At Risk” and the other was “Internet Addiction.” The latter included interviews with Philip Rosenthal, a therapist in the field and an expert on cyberspace crime, and Rabbi Yosef Viener, who offers to have anyone who wants contact him to be their internet policeman, so to speak. Here is an excerpt from the Internet Addiction article, specifically the part involving Rabbi Viener and his offer. 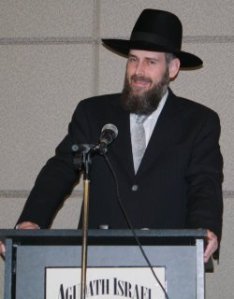 Rabbi Yosef Viener is a Posek, Halachah Columnist for HaModia and Rav of Kehillas Shaar Shamayim in Monsey, New York. As the first address for the community’s questions and concerns, every Rav is privy to things the average person has little or no idea about. Rabbi Viener not only fields shailos and hears peoples’ problems from his immediate community, but from many people all over the world.

Far from an alarmist, it is uncharacteristic for him to state with unusual absoluteness: “There is no single problem facing the individuals and the community at large greater than this. Nothing even comes close.”

He illustrates what he means:

A first-year beis midrash yeshiva bochur I had never met called me up. He had been home for bein hazman and was about to go back to yeshiva. He asked me if he could come over. I said yes. He came into my study, sat in a chair and proceeded to cry for the next twenty-five minutes. I couldn’t even hear what he was saying.

END_OF_DOCUMENT_TOKEN_TO_BE_REPLACED

As a magazine editor and published author, I have more than 30 years of articles, books and writings to draw upon.

This blog is a place for me to share some of the best and most recent, as well as just random thoughts that come up.

* Yaakov Astor's other blogs and websites